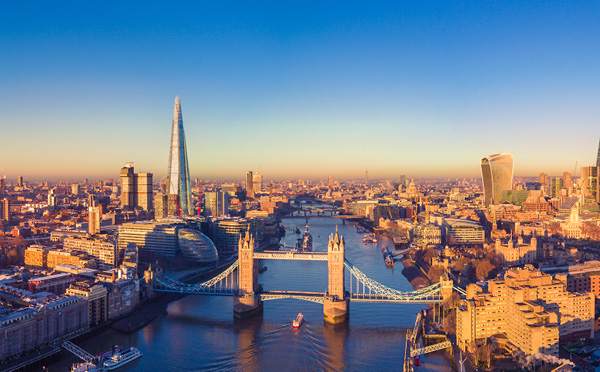 However, can the same be said about London’s congestion charge?

When the congestion charge zone was first introduced in February 2003, it was done so with the promise that by charging motorists to enter it, the zone would help to lower emissions in the surrounding area and increase the quality of air in central London.

- Carbon Monoxide levels are 60% lower than they were before the congestion charge was introduced.

- Nitrogen Dioxide levels have decreased by 24%.

- Sulphur Dioxide levels have decreased by 61%.

- There are 21 UK congestion zones’ either confirmed, proposed or possible leads.

- The government is set to lose £38.8bn in fuel duty and VAT once UK roads go fully electric.

- A nationwide toll could mean motorists would have to shell out around £700 per year, replacing fuel duty and VAT.

- The UK has the fifth-highest number of toll roads and congestion charge zones in Europe with 24, but France leads the way with 90.

Carbon monoxide levels have dropped across the board as soon as the congestion charge was introduced. Carbon monoxide is both odourless and colourless and is caused by an incomplete combustion process which can be extremely harmful to humans. The chemical has been shown to cause irritations such as headaches and respiratory problems. 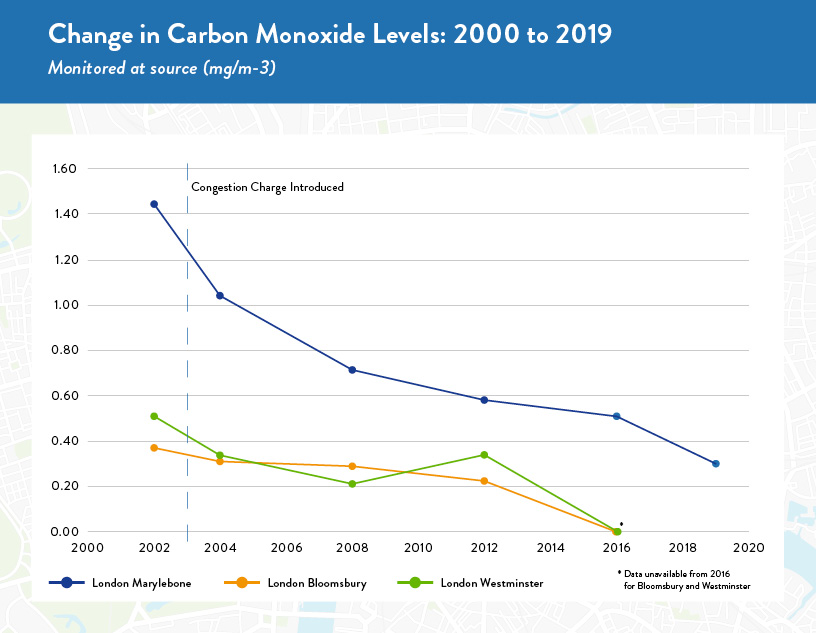 Sulphur dioxide levels in Marylebone have fallen by 61% and by 75% in Bloomsbury. Sulphur dioxide is a contaminate caused by combustion engines when sulphur reacts in the atmosphere to form fine particles and other pollutants. This can cause a major health risk, particularly to children. 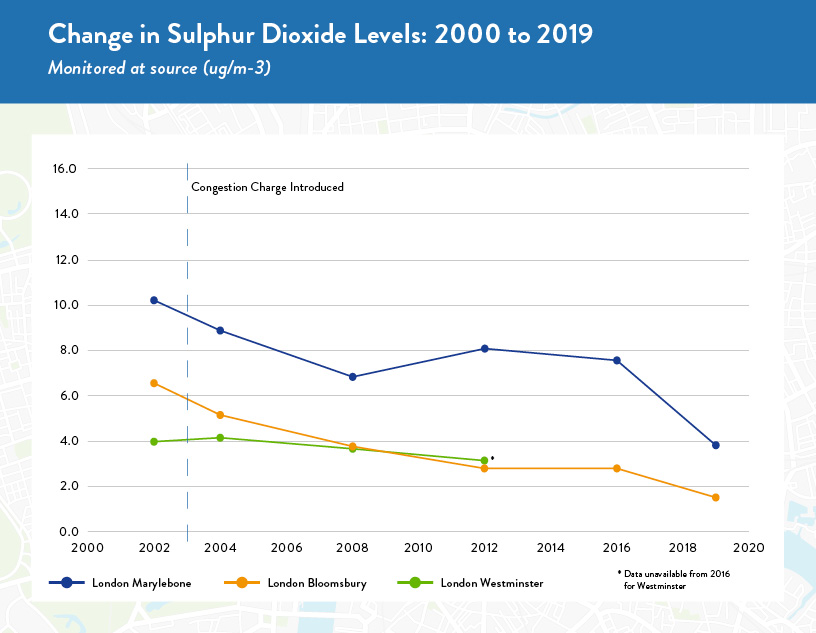 Nitrogen dioxide has seen a less dramatic fall. Indeed, levels in Marylebone rose in the years immediately after the congestion charge was introduced, but have fallen dramatically thereafter. Nitrogen dioxide causes issues by inflaming the lining of the lungs and reducing immunity to lung infections, which can then cause problems such as wheezing, coughing, colds, flu and bronchitis.

Our data shows that the London congestion charge zone has broadly achieved its aims, and many Londoners will believe that the cost of cleaner air is certainly a price worth paying. It could be down to this success that many other congestion charges and toll roads are planned throughout the UK in the near future.

Due to the success of the London Congestion Zone, 20 other cities are either planning or have confirmed they will be implementing low emission or clean air zones in the near future, with most set to begin charging motorists in 2020.

The purpose of these zones is to target diesel cars and older, more polluting petrol-powered vehicles. The trend of increasing toll roads, low emission zones and congestion charges shows no sign of slowing down as the move towards conserving the environment grows stronger and more urgent.

Electric cars will be exempt from any charges; however, and could have the biggest impact of all when it comes to encouraging drivers to make the switch from the combustion engine to battery power. But with that comes the risk of a further toll on all car drivers as the end of fuel duty, a sizeable boon for the UK government, looks set to great a vacuum.

Could motorists be asked to pay £700 more in tolls thanks to electric cars?

According to Bloomberg New Energy Finance, due to the increasing popularity of electric cars, the government could implement a nationwide system of toll roads in the near future to help offset the loss of tax generated from fuel duty. This would be highly controversial as toll roads and congestion charges are often implemented with the promise of benefiting the environment or shorter travel times. However, if a nationwide toll was implemented it would be tough to argue it as anything other than a recouping of earnings for the UK government.

Fuel tax and VAT is a very significant contributor to the UK government’s purse, with the treasury expected to bring in £28.8 billion in 2019. According to Shell, for every litre of petrol sold at their petrol stations throughout the UK, 66% of the cost to the motorist is paid to the government in the form of Fuel Duty and VAT. That’s an extremely large slice of income for the government to lose and, Bloomberg predicts UK motorists could face a nationwide toll of around £700 per year to compensate for the loss.

How Many Toll Roads & Emission Charges Does The UK Have Compared To Other European Countries? 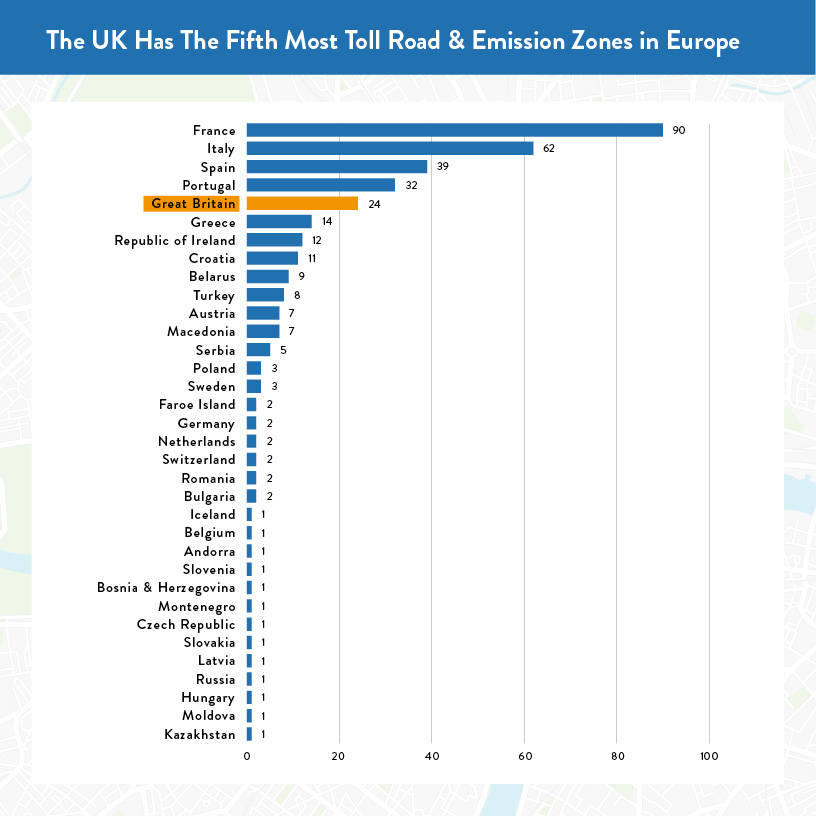 In total, there are 24 toll roads, tunnels, bridges and emission charges in the UK, but how does this compare to the rest of Europe? France leads the way with a staggering 90 locations where a motorist can be charged throughout the country. French motorists or tourists can pay anything up to €40 (£35.93) for a one-time trip between two nearby cities. This puts the £6.70 charge to use the UK’s M6 toll road into perspective. Overall, the UK has the fifth largest total in Europe, with Portugal, Spain and Italy making up the other three countries who have more, along with France. Many European countries choose to implement vignettes in place of toll roads.

A ‘vignette’ is a type of road pricing similar to toll roads in the UK and is used in many European countries. However, the key difference is that unlike toll roads where motorists pay to use a certain road one time, a vignette is based on a time period that a vehicle may use the road. For example, take the M6 toll road in the UK. Motorists pay a charge of £6.70 for a one-time trip. If the M6 toll road was adapted into using a vignette system, users would pay a set fee to use the M6 for 4 hours, 6 hours or 8 hours, etc. how many times they like. When entering countries that have implemented vignettes, motorists need to display a toll sticker at all times to avoid potentially hefty fines.

Toll roads, congestion charges and low emission zones look set to stay and substantially increase going into the next decade. With the numbers of electric and hybrid cars growing rapidly, the UK faces the biggest automotive industry shake-up in living memory. This means that those left behind the curve will be forced to pay to travel in some of the UK’s largest towns and cities, and even those switching to alternative fuel may want to keep a keen eye on legislation as the authorities look to patch up a £28.6bn hole in the treasury from the loss of fuel duty.

Proven to work, taking the example of Madrid where emission ratings returned to pre-congestion charge levels once the scheme was suspended. That, along with the data collected by Select Car Leasing has shown that congestion zones and similar road charges are effective, even if their time to impact is too much for some to stomach. It’s certainly good news for the environment as air quality improves, but the long-term picture for motorists looks much less clear.

Air Pollution in the World’s Most Iconic Cities: Stats and Visuals That Will Blow Your Mind

6 Reasons Why Green Lifestyle Is Getting Popular Around The Globe

5 Easy Ways to Green Your Commute