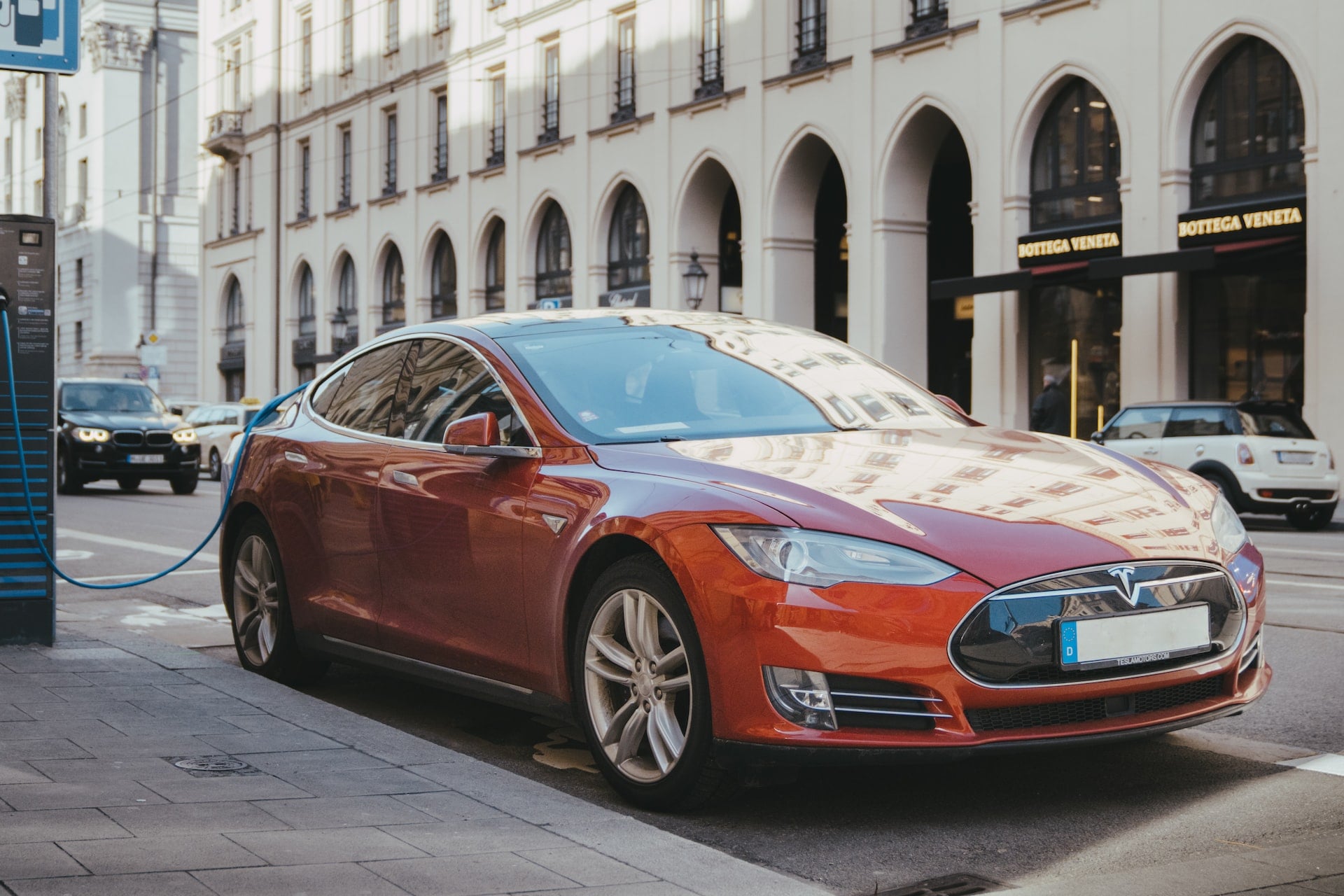 Photo by Alex Zahn on Unsplash

We know that making the switch to electric vehicles (EVs) is better for the environment – but what does this mean in practical terms?

Citroën has investigated what the impact of electric cars will be on the world’s animal and plant population. Could your switch to an EV save an endangered species?

Plants and animals have very specific climate requirements that allow them to live and thrive. While many animals and plants will try to adapt, the effects of climate change will cause their natural habitats to disappear or become hostile, making it impossible for them to survive.

Climate change happens as a direct result of CO2 emissions being released into the atmosphere. These emissions cause what is known as the greenhouse effect, which increases the planet’s temperature. This then results in changes such as melting ice caps, warmer seas and acid rain – all of which make animal and plant habitats inhospitable.

Fuelled cars emit large amounts of CO2 every day, and although an individual’s contribution to that may seem negligible, switching to an EV can contribute in a small way to making animal and plant life more sustainable. If electric transport goes mainstream, however, there could be a huge impact on the wellbeing of endangered species.

Over 60,000 animal & plant species could be saved if 50% of drivers switch to electric

Fuel-based vehicles are responsible for producing billions of CO2 emissions every year. While it might feel as though switching to an electric vehicle would have a minimal impact on the environment, the data shows that even 1% of global vehicles switching to electric would create a significant drop in CO2 emissions – over 50 million metric tons of the stuff.

Such a small transition could also save up to 1,300 endangered animal and plant species. But if 50% of road vehicles around the world switched to electric, that number would jump to over 60,000 species saved from extinction. The CO2 savings would also be very near three billion metric tons.

If all UK vehicles switched to electric, 3,900 animal and plant species could be saved

The impact of EVs on the environment is easier to gauge on a global scale, but the data is often more relatable when it’s closer to home.

For example, if every one of the UK’s 39 million road vehicles – accounting for only 3% of the global total – switched to electric, CO2 emissions would drop by 171 million metric tons. Almost 4,000 endangered species, such as the Black-legged Kittiwake, could also be saved. In larger countries like the USA, which accounts for one fifth of the world’s road vehicles, a total transition to EVs could save 24,700 endangered species 2.9 billion tons of CO2, while China ups that to over 27,000 species and nearly six billion tons of CO2. The American Manatee and Yangtze Giant Softshell Turtle are just two of the species that could benefit from EVs. 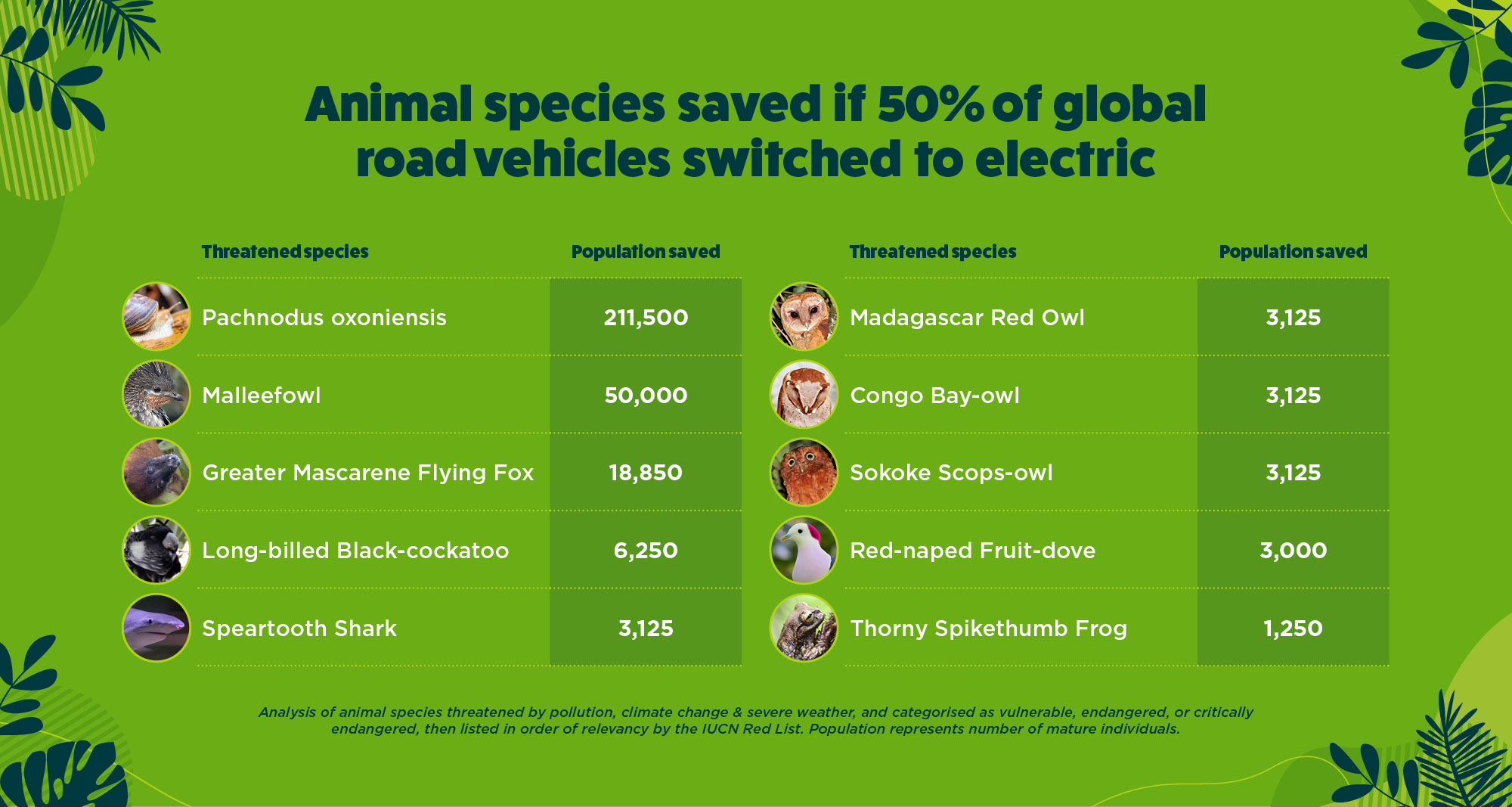 Over 300,000 of the world’s most endangered animals could be saved if 50% of global road vehicles went electric

Thousands of animal species are endangered thanks to pollution and climate change. By analysing the IUCN’s Red List, we can see that just half the world’s vehicles switching to electric can save over 300,000 of these endangered species.

As many as 50,000 Malleefowls, large ground-dwelling birds found in Australia, could be protected, along with over 3,000 Speartooth Sharks – in addition to emissions, these riversharks are threatened by mining pollution and commercial fishing. The impact would be felt even among the smallest animal populations, too. For example, the Javan Rhino has a current population of only 18 – nine of these could be saved with a 50% switch to EVs on a global scale.

Nearly 90,000 of the world’s most endangered trees could be saved by EVs

The Red List also covers plants threatened by climate change and emissions. The Mount Panié Kauri, for example, has a seemingly strong population of 100,000, but each of these is endangered. If half of the world’s road vehicles were to go electric, 50,000 could be saved.

The Macadamia Nut tree, so called because of the fruit it produces, would see half of its 600-strong wild population protected. Although many more commercial examples exist, these are grown from the cloning of natural trees. In 2019, it was estimated that nearly three quarters of macadamia nuts worldwide could be traced back to a single tree in Australia.

On an even smaller scale, the Rarotongan Coprosma has a current population of 30 – 15 of these trees could be saved with a 50% switch to electric.

If you’re considering an electric car for your next upgrade, browse Citroen’s Electric & Hybrid hub, or check our help guides and FAQs if you’re unsure on making the switch.

E-Waste Recycling: Is It a Worthy Cause?

4 Advantages of Electric Vehicles for Your Business

Mobility Scooters 2.0: A Look into the Future