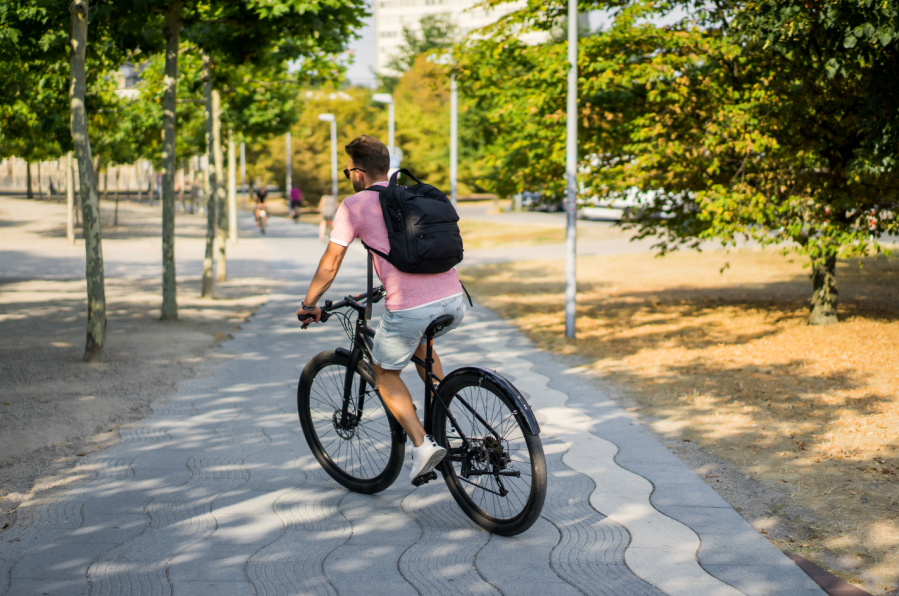 If you’ve ever thought about cutting your daily commute from four wheels down to two to escape traffic, you’re in luck. Biking to and from the office can also dramatically cut down on your carbon emissions and environmental impact.

There are a staggering 115 million cars on US roads every day, most of them used for commuting. Collectively, those account for nearly one-fifth of the country’s CO2 emissions. Switching those cars for bikes is one of the best ways to tackle the problem of climate change while creating greener, eco-friendly cities at the same time.

The number one way that bikes cut down on emissions is fairly obvious: they don’t run on gasoline. Instead, bikes rely on human power to get you to the office and back.

Sure, there are carbon emissions associated with manufacturing bikes. You even burn more calories from biking and driving, which in turn incurs a carbon cost through your diet. But, even after accounting for those emissions, you only have to commute about 400 miles on your bike to offset all of the gasoline you would have consumed by driving those miles instead. The average city commuter who rides 8 miles per day roundtrip would offset all of their carbon emissions by switching to biking within 3 months.

It also doesn’t hurt that eliminating gas from your commute can put quite a bit of money back in your pocket. Driving ends up costing around $170 per mile per year, compared to pennies on the dollar for biking. That’s money that you can put that money towards living a greener life at home or more sustainable travel abroad.

Eliminating the gasoline from your commute is significant not only for reducing carbon emissions but also for reducing air pollution. Car fumes, which contain sooty particulate matter, are ultimately responsible for more deaths than car accidents in the US and UK combined. They also contain greenhouse gases like sulfur dioxide, ozone, and nitrogen dioxide.

In major cities around the world, air quality noticeably drops during the busiest commuting hours because of all the cars on the road. Bikes, meanwhile, don’t emit any gasoline fumes. That’s a win for both the environment and the health of everyone who lives in busy cities.

Bikes Are Easy on the Road

Cutting out gas from your daily commute isn’t the only way that biking helps the environment. Bikes also do significantly less damage to city roads. By one estimate, the carbon footprint of road maintenance for cars is four times that of maintenance for bike lanes.

The number one reason is that bikes are lightweight – a typical commuter bike weighs less than one percent as much as the average sedan. So, riding over asphalt on a bike doesn’t cause it to buckle and crack. It also matters that bike wheels take up a lot less road surface than car wheels. Bike commuters need a lot less pavement, which means more space for parks, trees, and wildlife. Car-free cities of the future could even use some of that extra space to build solar panels.

Maintaining Your Bike is Low Impact

The last thing that makes bikes so much more eco-friendly than cars is the maintenance process. Cars require frequent oil changes and replacing massive rubber tires, among other things. These materials are almost impossible to recycle, so they sit in landfills for decades after use.

Bikes still use rubber tires, but they require a lot less material (not to mention that there are only two wheels instead of four). The environmental impacts of creating and disposing of synthetic motor oils also disappear entirely when you commute to work by bike. Bikes aren’t entirely trash-free – they still need the occasional brake pad or cable replacement – but they produce significantly less non-recyclable garbage than cars.

Help the Environment by Biking to Work

The first step to cutting your environmental footprint by biking to work is to find the right commuter bike for your ride. There are foldable options that can fit in your office, electric bikes that can get you to the office and back without breaking a sweat, and city bikes that require almost no maintenance.

Every time you ride to work instead of driving, you’re doing the environment a big favor. Plus, bike commuting is fun, healthy, and, in many cities, faster than driving. Make the switch to two wheels and watch your environmental impact drop every day you ride to the office.

Daniel is an avid biker and cares passionately about sharing how others can best bike in everyday life. Check out his website.

5 Easy Ways to Green Your Commute

Sustainable Living 101: Here Are the Changes That Can Make a Huge Difference

5 Ways to Be More Ethically Aware Through Everyday Living