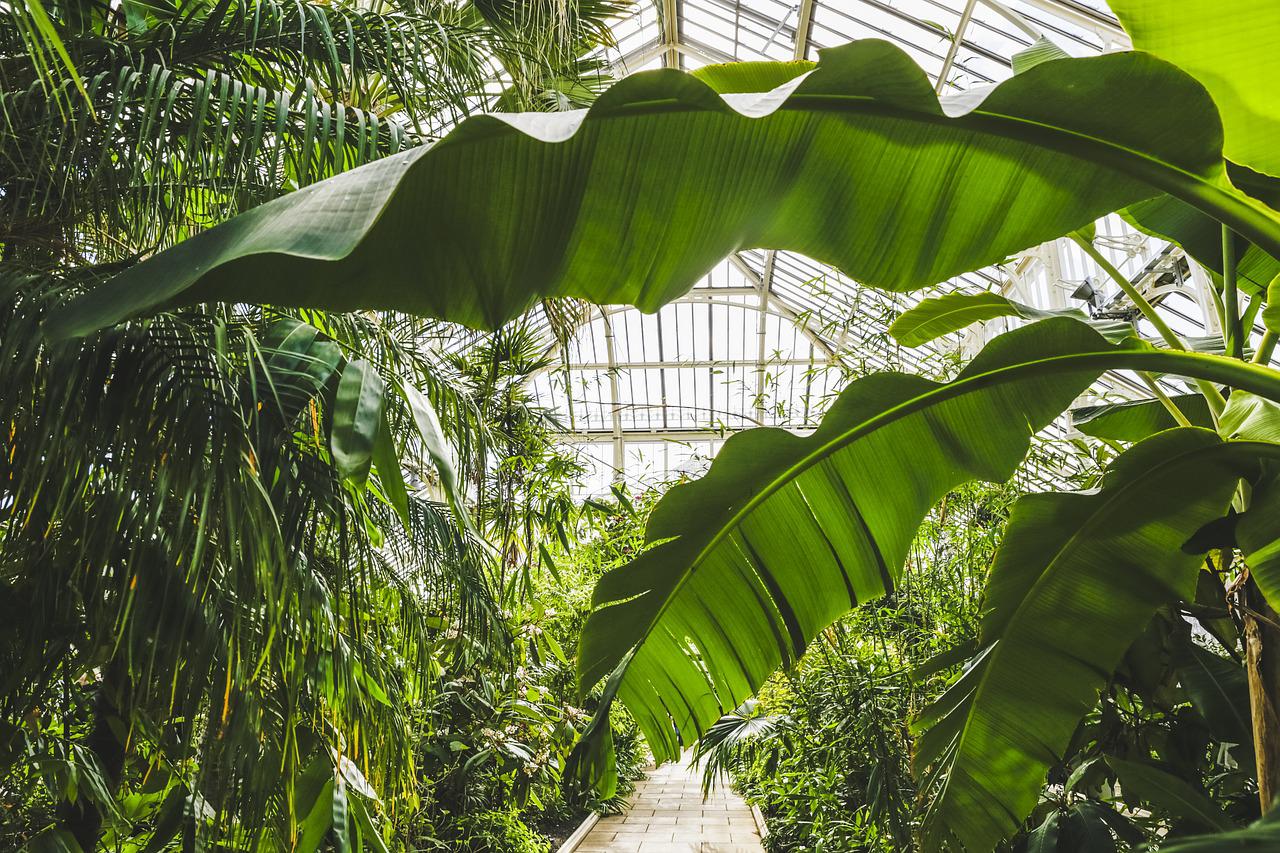 From severe storms to critical droughts, extreme weather changes caused by climate change are seriously impacting the planet. One upcoming event which has a significant impact on the environment is the fast-spending fuelled event that is Black Friday. Deliveries from Black Friday alone produce 429,000 tonnes of carbon and garden experts Primrose found that you would need to plant seven million trees to offset the effect of the day’s emissions.

Primrose, in support of Green Friday - an eco-friendly alternative to Black Friday – have imagined what five famous gardens could look like in the future as a result of the climate crisis. By using scientific research revealing the extreme weather targeting environments in five different countries, they’ve created interactive graphics to show what could happen to the world’s most sacred gardens if we don’t act.

The development of Pattaya’s Tropical Gardens has been incompatible with the coastal environment and climate change patterns, says the Head of Department of Development and Sustainability.

Tourist development is labelled as the main driver of environmental changes and makes the Nong Nooch gardens vulnerable to climate change risks, including water scarcity and pollution.

Primrose predicts that without access to water, greenery in Pattaya’s famous Nong Nooch Tropical Garden would soon wilt and die. Air pollution would also visibly damage the garden’s iconic palms and cycads, stunting their growth and causing them to turn mottled and yellow. 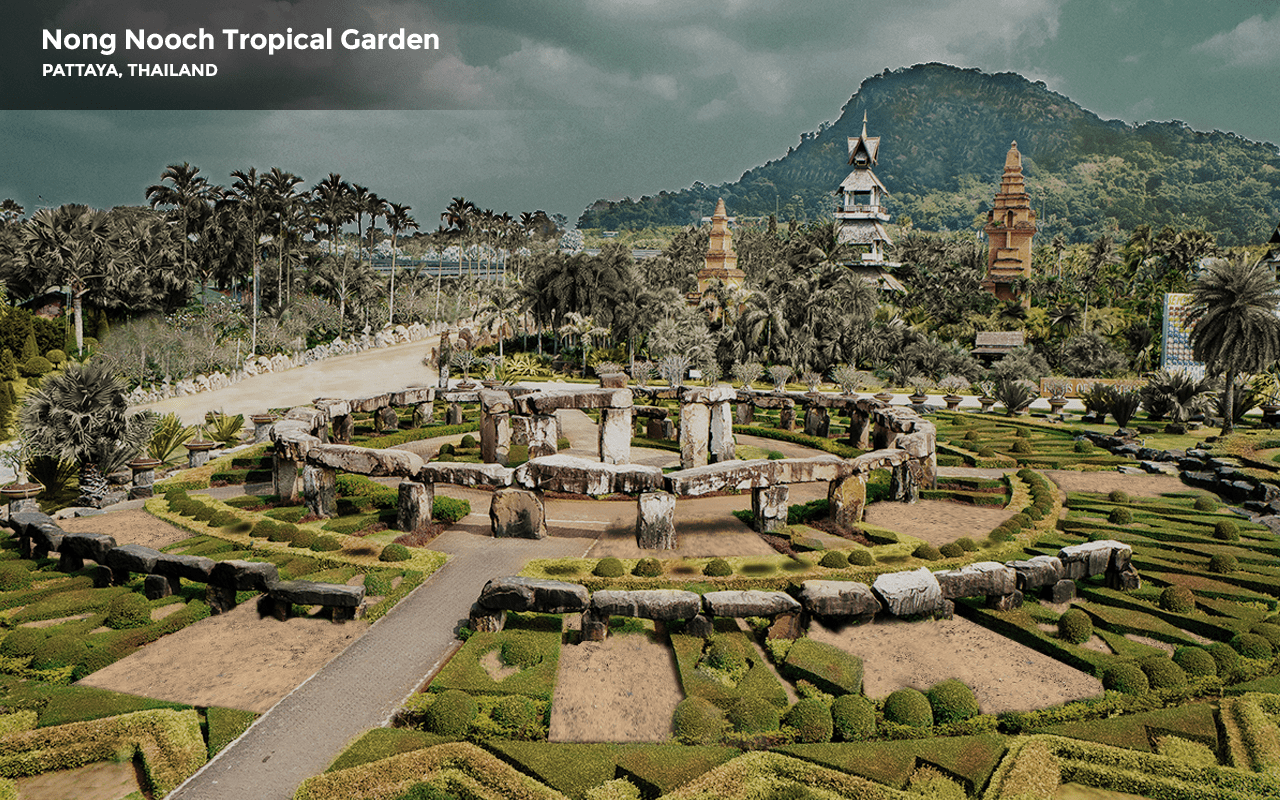 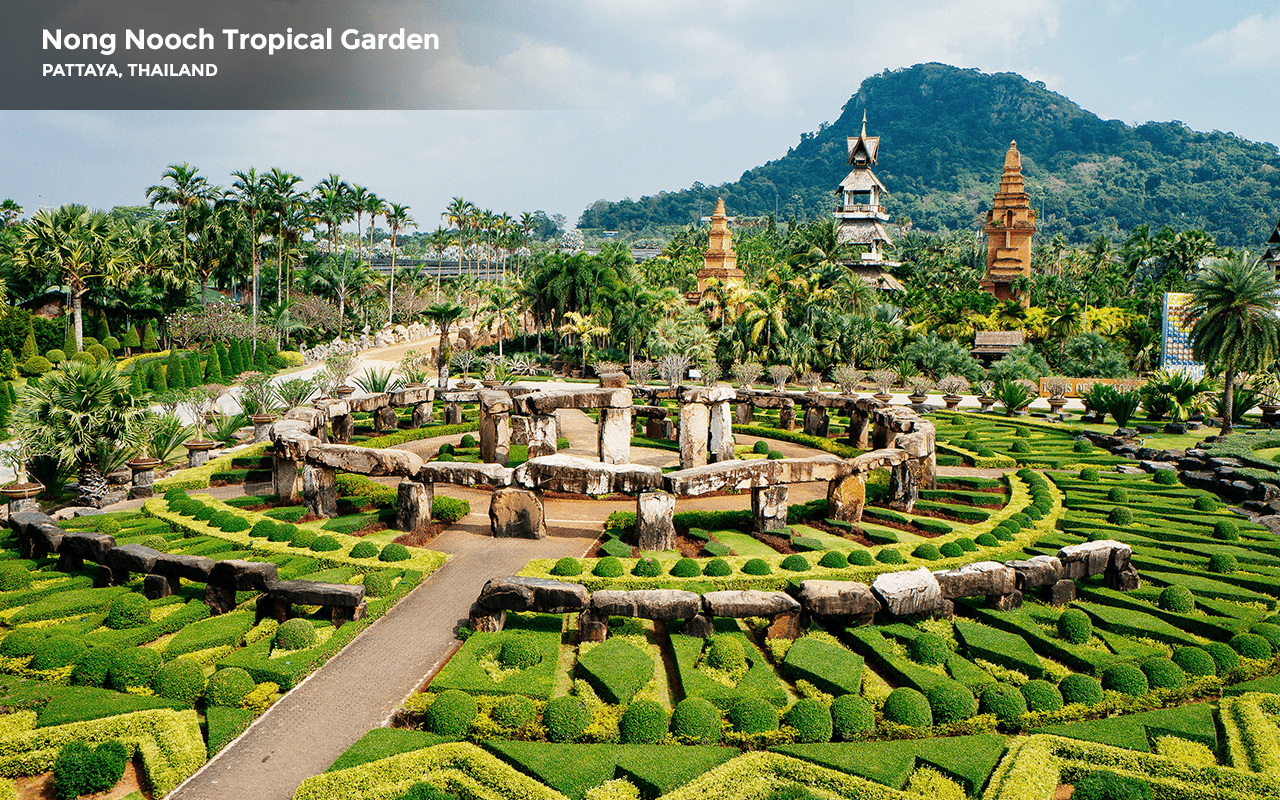 Climate Projections for Scotland and the UK suggest winters will be milder and wetter, however we may experience more heavy downpours of rain and more extreme stormy weather.

She states that waterlogging of lawns made grass cutting difficult and caused soil compaction, with a decrease in flowering plants and an increase in vegetative growth. The severe gale forces of extreme storms can damage the panes of glass in the glasshouses, just as 600 panes were back in the storms of 2012.

Primrose imagined how, if these extreme storms continued, this could affect the RGBE once again. The beautifully maintained lawns would be overgrown, flowering plants would die and the plants from the warmer climes of South East Asia kept in the glasshouses would die after just 24 hours of being exposed to the cold. 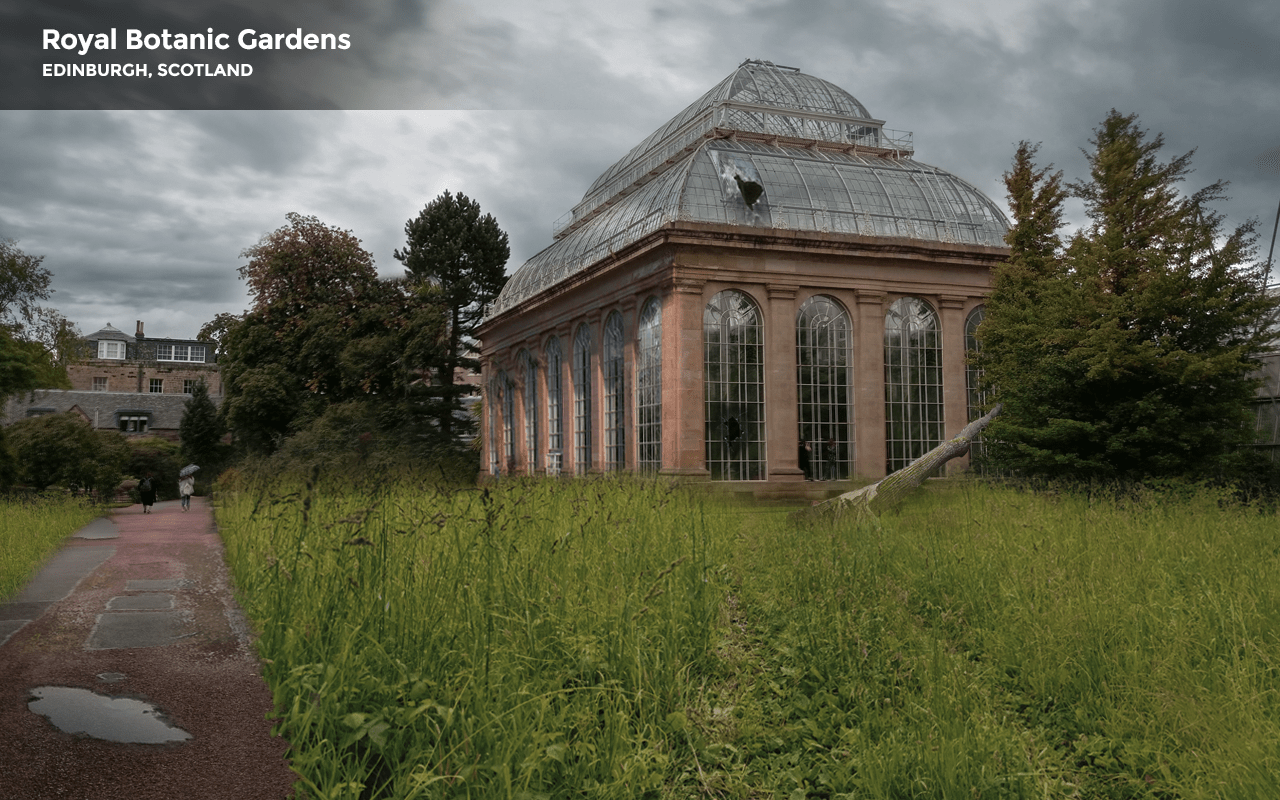 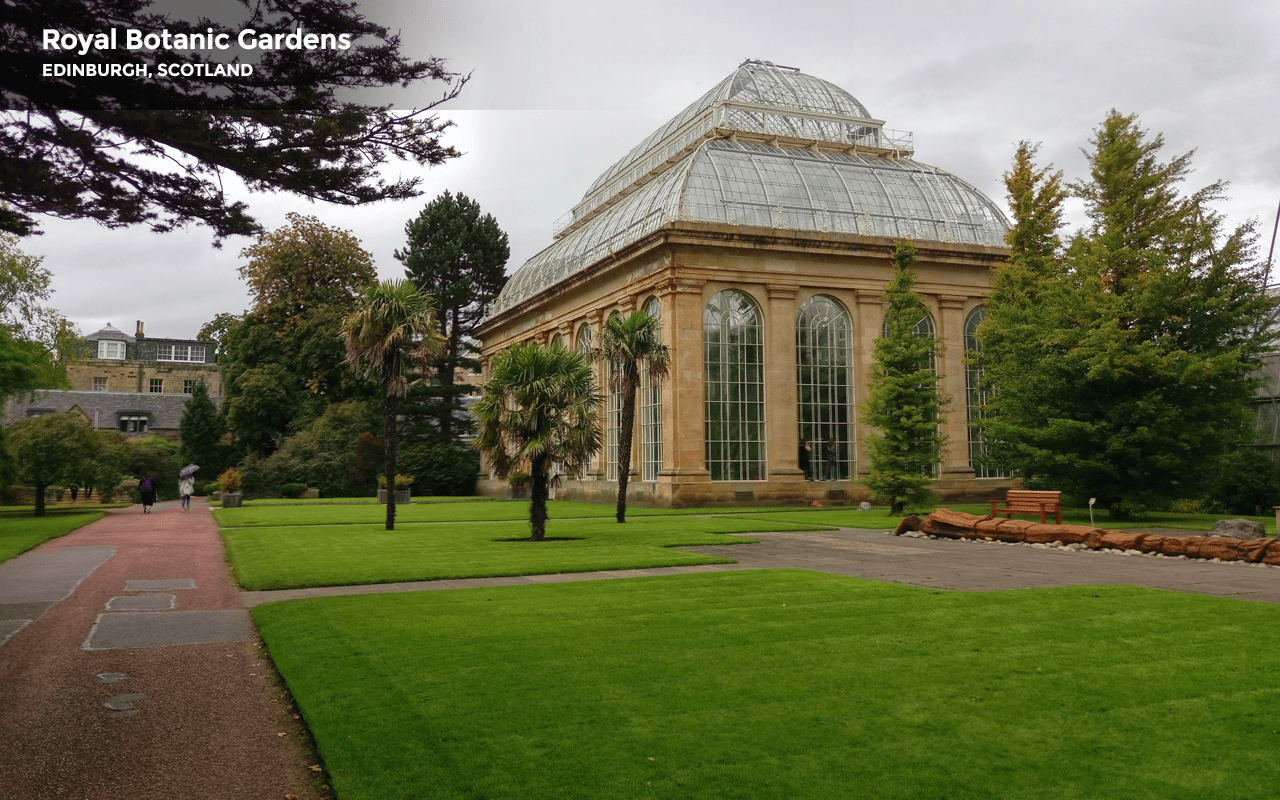 With extreme rising temperatures tackling mainland France, the recent record-breaking heatwaves are expected to increase further as the climate crisis continues. According to Climate Change Post, global warming in mainland France is 30% greater than the average warming throughout the globe. The average temperature has risen by 0.95°C, compared to 0.74°C globally.

Primrose found that climate change could seriously affect plant life in France, as heat stress dramatically reduces the growth of plants and causes irreversible damage to their growth and development. Claude Monet described his garden as his most “beautiful work of art”, but the Impressionist’s favourite plants would quickly lose their bright colours and wither in the extreme heat. 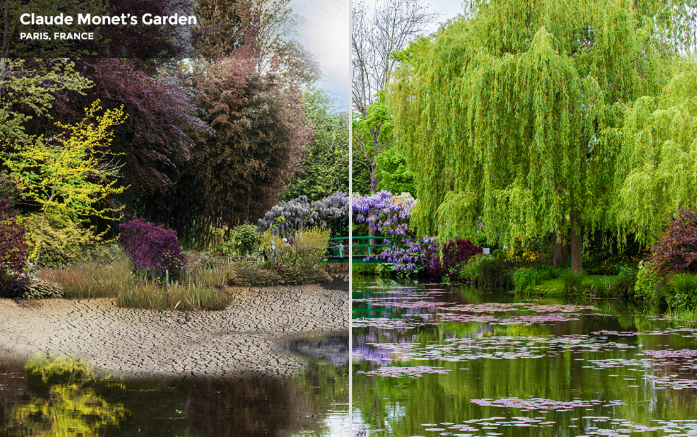 Tokyo is at high risk for wildfires, with a greater than 50% chance of encountering weather that could support a significant wildfire that is likely to result in both life and property loss in any given year.

The Global Facility of Disaster Reduction and Recovery explains further, “projections of future climate identify a likely increase in the frequency in the weather, with climate projections also ‘indicating that there could be an increase in the severity of the fire’.

Primrose visualised how this would affect one of Tokyo’s most famous gardens, the Koishikawa Korakuen. Primrose’s interpretation shows ash blanketing the ground of the garden, swallowing its vibrant beauty. Tokyo’s iconic weeping cherry blossom trees wouldn’t survive a wildfire and would take years to restore their former beauty. 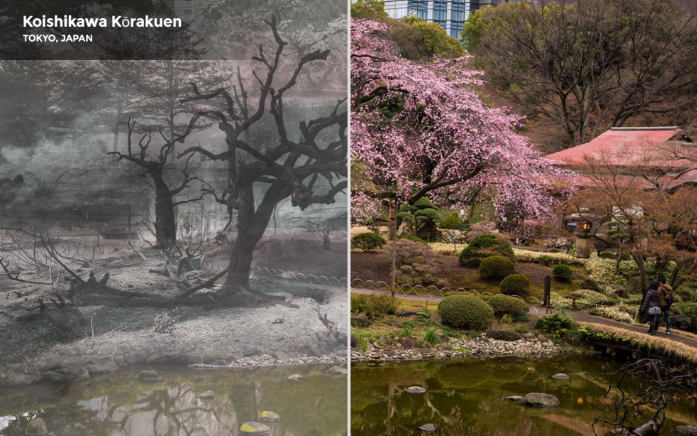 The UK’s very own gardens don’t escape the impact of climate change. A UK Climate Impacts Programme report states that the UK capital is exposed to far greater potential damage from flooding than any other area in the UK – and London likes directly within the floodplain of the River Thames.

Primrose found that one of the gardens at highest risk of flooding is Kew Gardens. They found that most garden plants at Kew would not survive a serious flood, due to limited access to oxygen and lack of nutrients in waterlogged soil. The eye-catching tulips outside Kew’s Palm House are likely to wilt and brown, rotting in flooded soil. Many of the 14,000 trees in Kew would also be vulnerable, as well as the daffodil and snowdrop ornamental plants planted throughout the grounds of Kew. 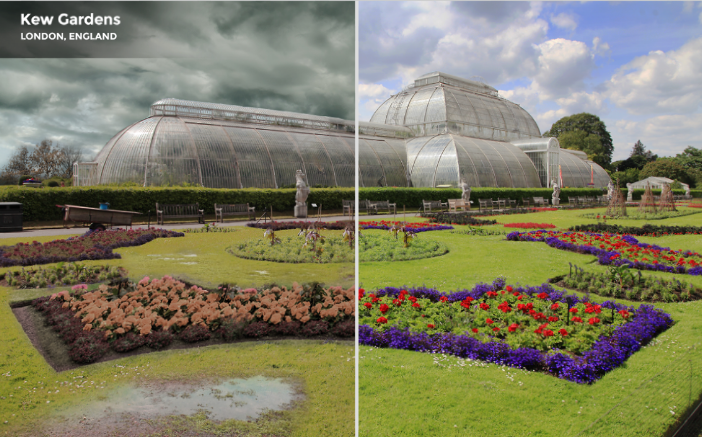 Primrose spoke to environmental experts from The Wildlife Trusts organisation to discover what would happen across the UK if we don’t stop the climate crisis.

Rachel Hall, Nature-based Solutions Officer for The Wildlife Trusts, says, ‘The UK is already experiencing the adverse impacts of a changing climate. We’ve seen a big increase in the frequency of extreme weather events including wildfires and flooding, which can be devastating for wildlife, and people too.

‘Our uplands are particularly at risk of degradation due to hotter, drier conditions. Without action, it's possible that up to two-thirds of upland peatlands, one of our most valuable carbon stores, could be lost by 2050.’

Gina Gavigan, Marketing and Development Manager for The Wildlife Trusts continues, explaining that, ‘If we can help the natural world to recover, it can help us turn the tide on the climate catastrophe through green and blue carbon solutions. It’s possible to paint a picture of a brighter, wilder future, but we must act now.’

With Devastating Droughts Across the USA, Could Precision-Targeted Rainfall Be the Answer?

Sustainable Parks and Why We Should Invest in Them

How the Desecration of the Earth Affects Native Nations